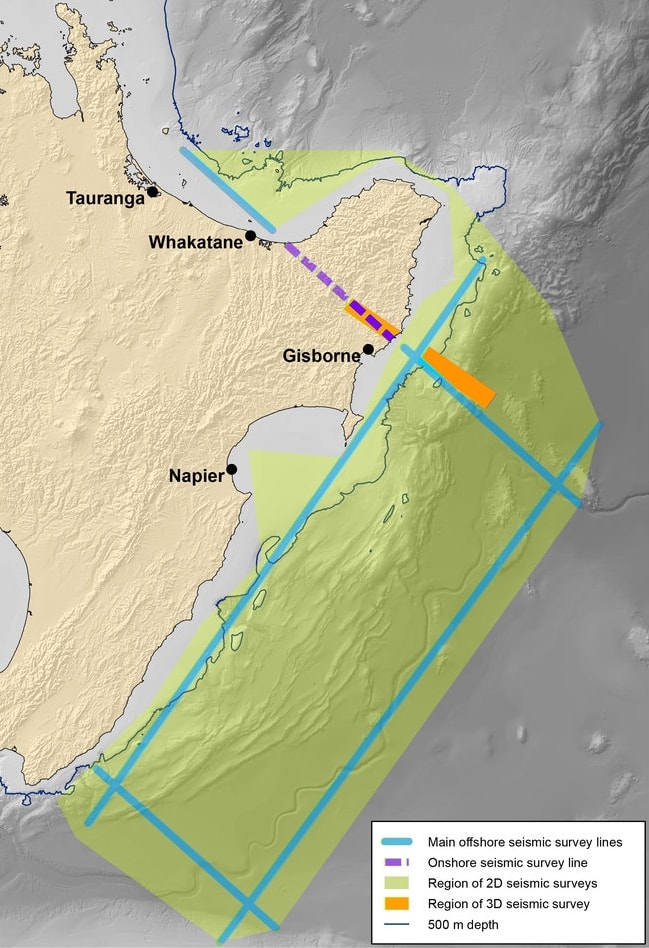 What is arguably New Zealand’s largest natural threat – a major active fault capable of generating a magnitude 8.5 earthquake – is about to be probed in a sprawling international project.

Such a “megathrust” earthquake – of the massive scale that triggered the 2011 Japanese and 2004 Boxing Day tsunamis – could release 2000 times more energy than the 2011 Christchurch earthquake that killed 185 people.

If a Japanese-style quake of the same magnitude were to hit central New Zealand, thousands of people could be killed and tens of billions of dollars lost.

Scientists recently uncovered evidence to show that two large events had hit New Zealand in the past 1000 years, confirming the risk posed by a threat more powerful and potentially destructive than normal quakes.

But there was much more to learn about the Hikurangi subduction zone, which runs along the East Coast where the Pacific and Australian tectonic plates collide.

A collaboration bringing together top researchers from across New Zealand, the UK and the US was expected to answer many of the burning questions surrounding the system – including what set it apart from other large subduction zones.

Niwa’s research ship Tangaroa would lower 100 specially made Ocean Bottom Seismometers on loan from Japan, to the seafloor in a grid pattern running from off Wairarapa north to east of Ruatoria.

Adding to the array would be more than 200 land-based seismic instruments across the Raukumara Peninsula.

Together, these sensors would record echoes from within the Earth, picked up from naturally occurring earthquakes and acoustic signals generated by a US research ship, Marcus Langseth, positioned off the East Coast.

This would allow the researchers to create cat-scan-like images revealing the structure of the Earth’s crust around the boundary, down to a depth of about 30km.

In most places, the images would be two-dimensional, appearing like slices through the Earth, but a more intensive survey area northeast of Gisborne would yield 3D images of the plate boundary collision zone.

These would give away the exact position of the two tectonic plates – and help determine the physical properties of the various rock layers making up the subduction zone.

The nature of the rock material on the grinding surface of each plate affected how the two plates moved past each other.

Using this information, scientists could learn more about how the plates are locked together at numerous points along the subduction zone.

That data would ultimately boost understanding of why different areas of the plate boundary behaved so differently.

Some parts of the plate interface slid past each other every year or so in slow earthquakes, while other parts appeared to be stuck fast and building up energy for a future large earthquake.

“A better understanding of what causes the marked differences in tectonic behaviour on this plate boundary will help New Zealand government agencies in their efforts to reduce the danger posed by earthquakes and tsunami in this area,” said lead US investigator Dr Harm Van Avendonk, of the University of Texas.

“What makes subduction zones rupture in huge, tsunami-generating earthquakes is one of the most pressing questions facing Earth scientists today.”

New Zealand project leader Dr Stuart Henrys, of GNS Science, said the more intensive study zone northeast of Gisborne was an exciting prospect, as it should provide the best images yet, anywhere in the world, of a zone where slow-motion earthquakes were known to occur repeatedly.

Scientists regarded the area of East Coast as the best place in the world to study and understand the phenomenon of slow-motion earthquakes, as it was closer to shore and shallower than other subduction zones.