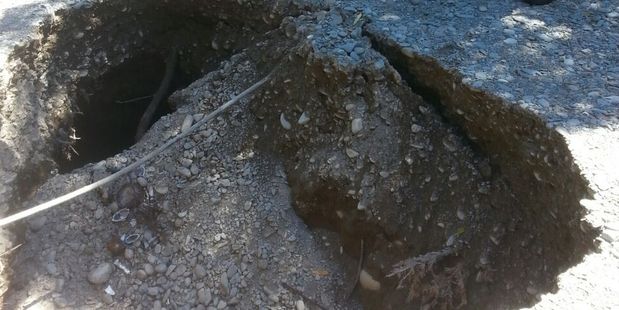 A large sinkhole which appeared yesterday caused consternation among residents of a Punakaiki neighbourhood.

The hole is estimated at three metres wide but includes a narrow section about five metres deeper which angles down to an underground waterway.

It’s located on road reserve land at the junction of Hartmount Place and Ross Place where the owner of a section put in driveway access to and across his property in December.

Neighbours living in an adjoining property said they were alerted to the hole yesterday morning by a tenant living on the other side of the driveway.

He had placed a section of old wooden fence in front of the hole to prevent a person or vehicle falling in.

Other residents said they had wondered when the development began what kind of site evaluation had been carried out as the local karst topography is known for its tomos (sinkholes or entrances to caves).

Hartmount Place resident Richard Arlidge said that was the problem with building in that environment.

“You never can tell when you’re going to come across an underground water system or cave system.”

He said a couple of years ago a hole emerged in his driveway, built 30 years ago, which was also on a road reserve.

It looked like a very small hole but a stick poked in it disappeared, he said.

Further investigation showed it was actually deep enough for a person to stand in, Arlidge said.

“WestReef filled it in with two-inch round pebbles like small tennis balls.

“The water can still move through that in theory when it’s trickling and when it’s flooding it’ll start going around it and continue its caving process.”

“When you fill them in you run the risk of diverting them.”

Another resident said the digger constructing the driveway at the site of the current sinkhole fell into another sinkhole.

The driveway then had to be widened so another vehicle could come in and help get it out. The first sinkhole was then filled in.

Residents were concerned yesterday about what might happen next as the deeper part of the hole angles out towards the road which leads to four properties offering tourist accommodation.

The nearest neighbours said since the driveway was put in vehicle lights have often been seen there at night and last week French freedom campers stayed for a night.

They said it was fortunate no one was on the other side when the hole emerged.

Residents alerted Buller District Council to the hole yesterday afternoon and by last night road cones had been placed around the perimeter.

The council was to meet the contractor who constructed the access way this morning to investigate a solution.

The council was unable to answer questions today. Chief executive Andy Gowland-Douglas said council staff were still on site early this afternoon and there was no cellphone coverage in the area.

“The only word I have is that it is not an easy fix.”